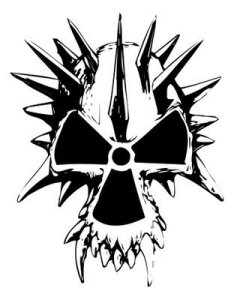 In August of 1985 the mighty Corrosion of Conformity played in Cambridge, Massachusetts at The Christ Church along with Post Mortem, PTL Klub, Executioner and The Offenders who were the buzz of the hardcore scene at the time. C.O.C had been around previous to this gig. I saw them a year before with Battalion of Saints and the Outpatients at the Paradise with the four piece line up, and also as a four piece with D.OA and The Freeze even before that at the Northeastern YMCA which held a few great shows for a little while (ummm, Void, Agnostic Front, Murphy’s Law, Kilslug and Siege on one bill? Good times!) They always put on one of the most intense shows you could see around this time. Just a loud thundering wall of sound coming out of three guys. At this particular show I remember there were a number of fights, something happened with the PA at one point forcing the band to perform an instrumental version of “Loss for Words”.

Also of note were openers Executioner, one of Boston’s more underground metal bands at the time. The reason a lot of these shows were happening (metal bands and hardcore bands playing together) was a result of guitar player Marc Johnson who was booking a lot of these shows. Executioner in true Spinal Tap fashion emerged on stage as smoke machines went off which then set off the fire alarms, almost shutting the show down. Marc and Executioner really did play a huge role in the history of hardcore and metal in Boston and any discussion about “the scene” without mentioning him or his band would indicate “you weren’t there”. They certainly weren’t the best band around but their presence was huge to kids like me. Also their song Victims of Evil was pretty awesome.

I was doing a fanzine at the time called One Step Forward. I was interviewing some great bands, and even as an awkward quiet 15 year old I never felt like I couldn’t approach an artist for an interview. At one point I was introduced to Brian Walsby or became pen pals with him, I don’t remember. He may or may not have helped set up the interview but obviously at this point, I can’t remember. Also of note in the van with us was a young lady named Lisa Carver who later went by the name “Lisa Suckdog”. Her and I were pen pals and she came down to Cambridge from New Hampshire to see the show and sat in for part of the interview near the end. Her questions are, ummm, exactly as they were printed in my zine…I was 15 years old during this interview so some of the questions are obviously kind of bland.

In subsequent visits to Boston, even as late as the Blind era, Corrosion of Conformity always put on an intense show and Reed Mullin always took the time to say hello, remembered my name and was a generally great guy. They are apparently touring with this lineup soon and hopefully I’ll make it out to one of them. For more info on those new shows,  check out their website

The blurry pictures here are from the show. Once I get a scanner set up I will scan the pages from the actual fanzine. 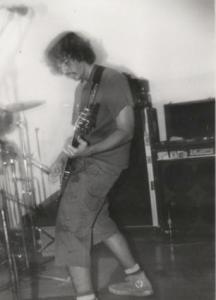 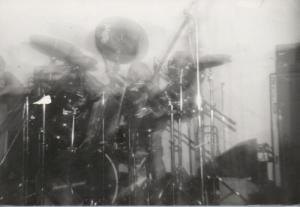 OSF: Okay first off, where do you think you fit in: metal or hardcore?

Reed: Well look, I can’t even do a drum solo…Woody can’t play “Eruption”. I consider us more a hardcore band than anything else, lyrically and musically I think – (bassist/vocalist Mike Dean opens van door) Get out of here Mike Dean!

Reed: Get out of here

Reed: Lyrically, definitely. I don’t think we have anything in common at all to do with heavy metal lyrics. We’re influenced I guess by Black Sabbath, Black Flag and Bad Brains.

OSF: When did COC form?

Reed: June 1982 in Woody’s basement. We just practiced a little, played parties and so on. When we started none of knew how to play so we did GBH covers and stuff like that

OSF: How would you compare this new record (Animosity) to the first record (Eye for an Eye)?

OSF: Who produced it?

Reed: The guys from Metal Blade…well we produced it, but it was engineered by them. It was recorded in a better studio. Side two was done at the same place we did “Eye for an Eye”

OSF: What do you think of Satanic lyrics?

Reed: I think they’re cool just because they open people’s minds. They irritate Christians I guess. As long as you don’t take it too seriously it’s pretty funny. I don’t know, that Satanic stuff has been so overplayed it’s cliche

OSF: Do you think you sound better as a three-piece?

Reed: Things move a lot faster because me and Mike Dean sing. All our old singers were really slow in learning lyrics. As far as live stuff, I think we’re lacking a bit. But our old singe he was a real nice guy, he just couldn’t sing. I think I like the three piece better

OSF: What do you do when no playing in the band?

Reed: I work for my dad as a secretary, and I set up all the shows in Raleigh. That’s about it, my job is nine to five.

OSF: How old are all of you?

OSF: What are you listening to for music?

Reed: Right now my favorite bands are Descendents, Honor Role, Bad Brains and Rudimentary Peni, that’s what I’m listening to most. I like millions of different things; I like Slayer, Exodus and Venom, and some reggae.

OSF: Who’s idea was it to cover “Green Manilishi”?

Reed: Well Woody was in a heavy metal band, heavy metal cover band before he was in COC and he used to do it so we thought it would be funny if we just tried it. We did it and thought it was funny so we kept doing it.

OSF: What happened last time you were supposed to play here?

Reed: Well we were ready to go, I mean everything was packed up and ready to go, and then our car wouldn’t start, and it was our alternator. We got a new alternator at the last minute  and while we were putting that if we poked a hole in the radiator.

Lisa: How did you get together?

Reed: Me and Woody went to school together for a while, and Mike Dean moved up from a southern city and we just started practicing in Woody’s basement

OSF: Well I saw Elvis Presley stickers all over the van…

Brian: What the hell is this guy doing?

Lisa: Do you guys have advice for beginning bands?

Brian: Go metal, that’s where the bucks are!

Lisa: Do you get along with Boston Bands?

Reed: I think all the Boston bands are great

Lisa: Do you have day jobs?

Reed: Woody works as a jeweler and I work as a secretary and Mike Dean works for me

Brian: It should be said that both Reed and Woody work for their own families

Brian: I just mooch off of Reed

Brian: Hey Reed can I have some money, I’ll pay you back

Reed: Have a good day

OSF: Have a day