I don’t really have any kind of fashion sense, especially since I never go anywhere besides work, Starbucks, supermarkets and gas stations. I wear the same thing I’ve been wearing for however many years now. Jeans, never shorts, steel toed boots, two t-shirts and a “work shirt” over those. Usually one of those Dickies ones in blue or black. Even if it’s 107 out, this is the outfit I have on. Unless someone I love dies and I have to go to a funeral, I’ll probably never wear a suit or a tie for the rest of my life. I’m fine with this. I don’t care what other people wear and try my hardest not to associate with anyone who does care about trivial things like clothing. So it was with great sadness that I tore the black Dickies shirt I had owned for about five years now. (The blue one I wear has been going strong since the 90’s, really) The closest place between where I live and where I work to buy one of these is Walmart. I imagine there are other places I can buy these shirts such as THE INTERNET, but I really needed to get this shirt today if I wanted to satisfy the OCD thing in my head that was starting to make some noise at the fact I’ve been wearing the blue one exclusively for a couple of months now.

This particular Wal-Mart also has a Subway in it. Subway is currently enjoying a spot at the top of the fast food chain game world in the United States according to recent articles I didn’t read but saw the headlines on Huffington Post. Since I brought no lunch to work with me today I decided I’d give it another try. I hadn’t eaten at Subway in a year or so. I’ve recently lost a good amount of weight, about forty pounds, so most fast food is out of the question at this point. SUBWAY HAD THAT GUY THOUGH SO IT MUST BE GOOD FOR YOU. I figured I could find some sort of cold cut thing in there and I’m not eating chips anymore so I should be okay…but not really. 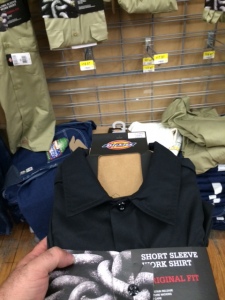 I walk in and the Subway is on my right, I notice about five people in line so I decide to go find the shirt I need first. I panic a little as they only have the tan ones, and since I’m not about to join the Nazi Party I certainly don’t want one. Also, I don’t want to look like a walking cantaloupe. Finally I notice there is one black one left, my size on the shelf below, not hanging on the peg. I grab it and make my way to the registers which are all about a dozen people deep. I figure I can take the shirt into Subway and pay for the shirt after.

The line in Subway is significantly shorter now aside from some old woman and what I presume is her daughter. They are ordering…I try not watch the Subway people making the sandwiches and pulling the various meats out of the little trays as it really is disgusting. It would be what I imagine watching a video collage of yourself being conceived and born is like. While in line I am also keeping tabs on the lines out in Wal-Mart CENTRAL I guess we’ll call it. I briefly look at various escape routes and where cameras are located, and think of where I’m parked thinking I can just walk out with the shirt and not pay for it. It’s Wal-Mart, I would not feel a shred of guilt stealing from them. Sort of how you feel when you see someone young fall down on the ice and don’t stop to help them. They’ll figure it out. While I’m daydreaming about minor theft a guy steps in front of me in line, he’s apparently with the women in front of me and they were holding his space. I was pretty excited to learn this same gentleman was here to order FOUR FUCKING SANDWICHES. I briefly thought about how I joked on Facebook earlier about someone ordering three breakfast sandwiches. That story was not true at all. A guy did order one breakfast sandwich in front of me this morning, but as is often with things I post there, they are made up incidents created for humor. Most people can relate to mundane little annoyances like that and that’s where my humor and daily observations often come from. THIS FUCK IN FRONT OF ME THOUGH, NOTHING FUNNY ABOUT HIM AND HIS FOUR SANDWICHES AT ALL. This whole process adds about nine minutes to my experience in the line. I notice he is talking kind of softly when he orders each sandwich, like he knows he messed up my whole life and now I am staring at him with daggers. He is finally gone and I order my cold cut sandwich which I just ate and it was truly disgusting and I will never go there again as long as I live, but I don’t want to get into that.

I decide against stealing the shirt after briefly thinking I might be able to just put the shirt on over the ones I already have on. I’d have four shirts on. Maybe I could go hang out with Mr. Four Sandwiches Guy. I scope out a line to stand in. The express line at Wal-Mart by the way is “LESS THAN 20 ITEMS” What the fuck kind of express line is that? HOLD ON, LET THESE FIVE PEOPLE WITH NINETEEN DIFFERENT TYPES OF DORITOS AND BOYS UNDERWEAR AND FAST AND FURIOUS DVD’S GET IN FRONT OF YOU AND YOUR ONE SHIRT OVER HERE IN THE EXPRESS LANE. I find a line with five or six people. I look ahead and the woman checking out is putting potted plants on the conveyor thing which for some reason makes me sigh. I don’t know why I think a potted plant will take longer than say, a can of Glade to deal with but I do. Just then the dreaded happens. The lighted number above the register starts blinking and the cashier is now holding up a pair of boots. Probably not as intense as my semi-expensive steel-toed ones, but nonetheless, work boots. WHO THE FUCK PICKS AN ITEM THAT ISN’T PRICED? The cashier decides to leave us and go find the price herself. WAIT WHERE IS THE SHOE DEPARTMENT. WHAT IF IT’S ALL THE WAY IN THE BACK? WHO IS GOING TO TAKE CARE OF US NOW? Another woman shows up and rings up the rest of the boot lady’s items. Now there is one party in front of me, a woman in her sixties and a younger woman who have a carriage filled with stuff. The older woman suggests I go in front of her as “you look like you probably want to eat your lunch there” ARE YOU SAYING I AM FAT? We had a little small talk banter about the other Wal-Mart’s around. She apparently enjoys the one in North Reading. I let her know I’ve been there as I used to live in nearby Woburn and fuck I would rather be in the back of a police car on the way to the joint for stealing a $17 shirt from Wal-Mart than having this conversation with this perfectly nice lady. Just then a new register opens and I am motioned over. I swipe my card and the whole transaction takes maybe two minutes. I thank the lady who was going to let me go in front of her and now I think I am going to go stick a Sharpie down my throat and get rid of the Black Forest Ham and Turkey on Seven Grain Wheat. Perhaps I’ll write about how that goes. 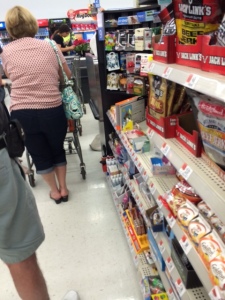