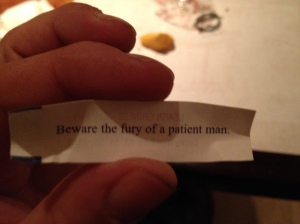 A postcard was sent to an old address I haven’t been at since August of 2009 informing me I had been selected for jury duty. I was more than happy to take a day off from work in the middle of the week. This was maybe my sixth time going to jury duty since I turned eighteen seventy-five years ago. Most people sigh when they tell you they have to go to jury duty as it usually means you end up sitting in some room for three hours with a bunch of squares who also don’t want to be there. What’s there not to like? I think of it as one of those civic duties you feel good about after doing like voting, giving blood, or wiping your ass on a piece of paper and mailing it to the Westboro Baptist Church.

I was scheduled to be there at 8:00 AM this morning. When I registered online after receiving the notice I put my new address in, since the court I was scheduled to appear at (Woburn) was in a different county. I’ve had four addresses since I lived in that county. Last night I received a “confirmation e-mail” that it was a go for this morning.

My normal social anxiety that takes place when I have to go to any kind of event that isn’t part of my daily routine would possibly be in full swing. Knowing that, I always try to dress as inconspicuous as possible. Sometimes it backfires. Today I wore all black, with a black Boston Bruins baseball hat. Halfway there I realized I was dressed like a cross between Kirk Hammett and a guy about to break into a house at night. I try to never wear anything that makes me stick out in any situation. I hate being in out with someone dressed like that as well. For instance if we were to ever meet up for dinner and you showed up wearing a yellow jacket I would probably leave. If you wear any kind of hat around me that has an elaborate brim, or has a feather in it, forget it, we’ll probably never be friends aside from on the Internet and maybe through some text messages.

Jury duty is generally a lot of sitting around and waiting for some adult to tell you it’s okay to go home. It’s kind of like being at a birthday party but without cake and singing. You always want to bring a book or a magazine with you. Some courts let you bring a cell phone, laptop, e-reader, etc. with you. I decided I wasn’t fucking around and brought two of those things in with me.

I arrived right on time, about five minutes early. Seeing security and metal detectors without a long line in front of them is always nice. I realized I was wearing steel toed boots about twelve seconds before walking in. Fuck. I emptied my pockets of everything and was reminded of the time I decided I would try smuggling marijuana on an airplane after September 11th, 2001. (I was flying a red-eye somewhere, for a brief three or four day trip. Upon arriving at Logan Airport I put a small amount of marijuana in a cigarette wrapper and put it in my mouth, like I was chewing tobacco. Looking in the rear view mirror my cheek was bulging. I decided to try behind my upper lip. Nope. Lower lip. Sorry. Looks like I wouldn’t be bringing any marijuana on my brief trip. My next best idea was to just smoke all of it, or as much as I could while sitting in the car. Maybe it would make me so high I would be high for the whole trip. Midway through that idea I realized, no, I’d be going through a security checkpoint, dealing with baggage people, and getting on an airplane. Social anxiety kicked into high gear as I made my way to the security checkpoint. Thankfully flying at night makes lines pretty much non-existent. I got to the metal detectors and emptied my pockets, placed my bag on the roller, and realized I had a cup of coffee in my hand. I put the cup of coffee in the bin with all of my emptied pockets stuff and sent it through the machine. Once I got to the other side, and one of the agents was guiding me along we noticed my coffee had spilled all over the inside of the bin, on my wallet, keys and everything else in there. The agent let me know I should have just walked through the metal detector with it. For whatever reason I thought this was the correct response to that: “Well, couldn’t someone sneak plastic explosives through like that?” The agent informed me I was not allowed to make comments like that. Now petrified of everything in the world, I made my way down to the gate.) Immediately the buzzer goes off and I’m told I am going to be checked with the wand. Just then one of the agents says “What happened to those Bruins last night?” I ignore him and then he says the same thing again. I realize I’m wearing a Boston Bruins hat yet I can’t for the life of me think of the single name of one professional hockey player even if I tried for five minutes. I don’t watch hockey. I like it, but I also like playing Boggle but I’ll probably never play Boggle again as long as I live. Wait, that’s not true. I kind of have an unwritten rule that when I am in a town other than Boston I’ll wear a Boston hat. If I’m here in Boston I’ll wear a Dodgers hat, or my St Louis Cardinals one I bought with my friend Mike from St Louis, in St Louis. Either way, it never fails, every time I wear this Bruins hat someone asks me about the game the night before. I should probably start wearing it the night they play so I look like I’m waiting to hear the outcome of the game. My boots don’t go off with the wand and I’m sent on my way.

Upstairs in the jury waiting room I’m sent to fill out a questionnaire to make sure I qualify. It gets to the part asking if I’ve ever been arrested and I have to think back to the few times I have been arrested more minor stuff. It was so long ago and so stupid (doing graffiti twice and driving with a suspended license once). I put the suspended license one down and made my way to the counter. The guy takes one look at the sheet “MAHBULHEAD? YOU SHOULDN’T BE HERE”, I look over at all the folks sitting there with their newspapers and looks of despair and now jealousy and I’m told to move down to this guy that will dismiss me. “You’re all set, you’re now set up for Essex County, they’ll probably call you at some point, or maybe not, have a good day” Thanks.

It’s 8:04 AM when I get back in my car. I should just go to work I’m only a half hour late now. I could go to a Chinese food buffet! The movies! Shopping! Nah, I’ll go home and write about my four minutes at jury duty today.

One thought on “Jury Duty”