Roswell to Flagstaff: The Vapes of Wrath

I left Roswell feeling like shit again. Not physically, but not sure what I was doing. I was going to drive to Flagstaff today, not before hopefully stopping in Albuquerque and taking some photographs. This stretch of the drive is tough, it’s one of the most beautiful parts of this particular route but when you’ve already been driving for a week you kind of grow numb to it. “Oh, the earth shit out another mountain, great” The drive west to east allows you to experience that part of the country with a fresh pair of eyes and an empty brain.

I arrived in Albuquerque and my first order of business would be to find some Breaking Bad filming locations. I found two within a few minutes (the car wash and Saul’s office) I needed lunch. I pulled over in the Saul’s office strip mall and posted the Breaking Bad pictures on Facebook and then got a few suggestions around town where I should eat. Per usual, because I was by myself I decided I would get Chinese food. In New Mexico. For the second time in my life. The food was pretty good and I will stand by that decision as a good decision. It erases that first time I did this a few years ago or eating it in Oklahoma a few days before.

So I quit smoking cigarettes in 2009. June 15th, at 1:40 PM. I remember the date and time. I never went back ever. I even tested myself that summer by driving across country one and a half times and taking a train halfway across the country without nicotine of any kind. Six years later I never even think about it, people smoke around me, and although it’s horrible and disgusting, I don’t mind it that much. If anything it reminds me of why I don’t like smoking cigarettes anymore. On previous vacations cigarettes were your best friend on hours long drives. You could by a carton for real cheap on a Native American reservation and smoke as many as you wanted. One every hour, three in a row, there was no limit to the amount of cigarettes you could smoke. The main way I stopped smoking was I taught myself to dissociate cigarettes from boredom among other activities (post –meals, in between songs at band practice, etc). So they were useless on road trips. They didn’t improve any situation, they never did, ever. Vaping might have though. At a truck stop to get a beverage I decided to by one of these disposable e-cigarettes and “vape” I had spent the better part of a year making fun of vaping culture on social media, but I was out in the middle of nowhere no nobody would see me vaping. I was also confident going into the experiment I would not get hooked back on nicotine, and I can proudly say I haven’t vaped since or had a regular cigarette. I assumed I would try this for a day and just never tell anyone about it at all. I do all sorts of things in life that I never tell anyone about. Everyone does, right? 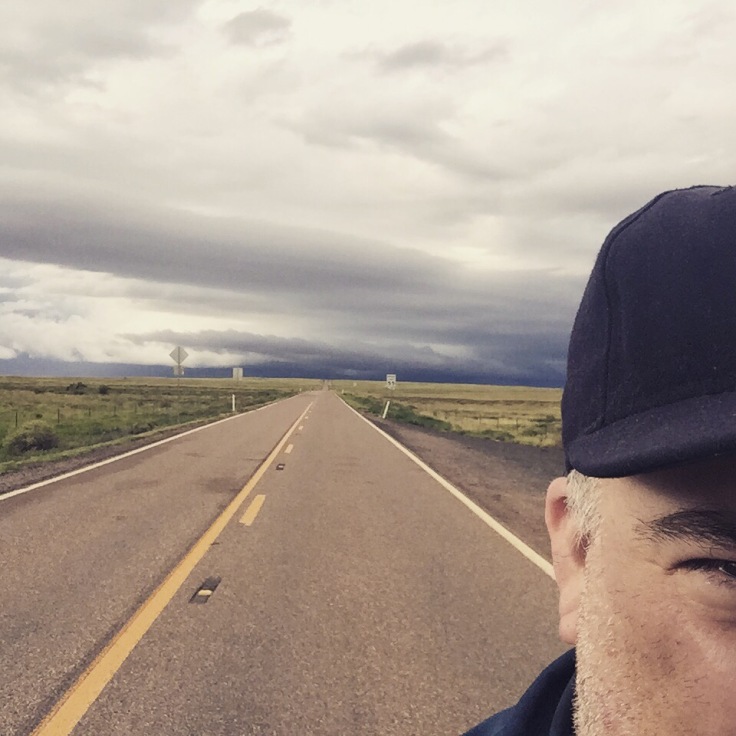 The one I bought cost me around ten dollars and promised me 500 puffs or something like that. I took it out of the package and took a drag off of it. I only tasted a little and it was pretty disgusting. They had flavored ones, just like the big boys vaping “mods” where you can get all sorts of flavors that a person should never vape. Even these small e-cigarettes have flavors but I just went with “tobacco” I guess it tasted like tobacco, and for the two days or so I used it I was “addicted” to it. Not in the physical case where I needed it, but I did keep pulling the thing out every hour or so to take pulls off of and blow little clouds of vapor in my Hyundai and perhaps just to have that feeling of smoking a cigarette in the car. 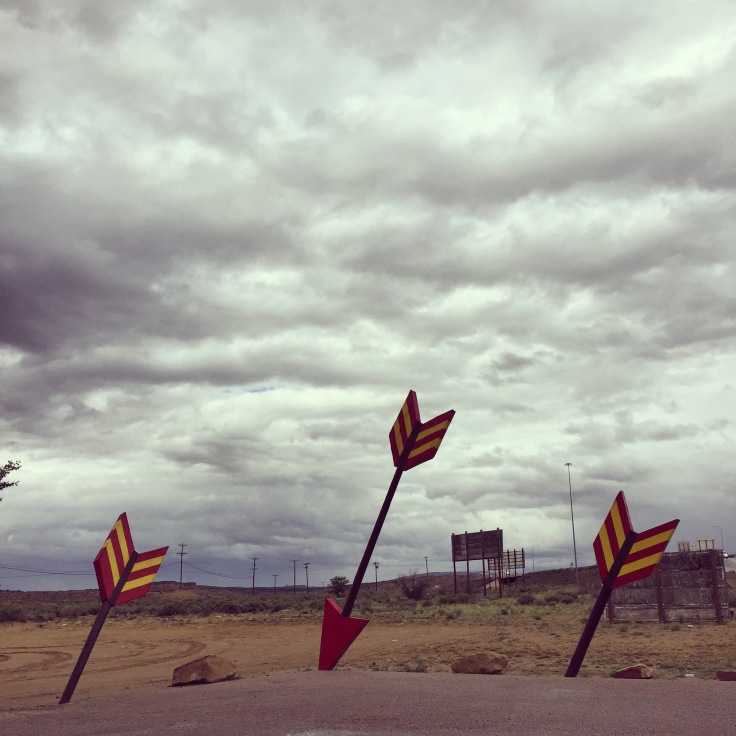 Because I left a little later than normal, I imagine as a result of the marijuana juice the evening before (Who am I?), I got to Flagstaff after the sun had gone down. It was a long uneventful day through a lot of beautiful mountains and long long long stretches of nothing. I try to get lost in either music, or someone talking on the radio, every once in a while just the sound of outside. Once the sun goes down and it cools off a little I start to get tense. It started raining when I got to Flagstaff. I pulled over and searched for a good price on a hotel, found one within a minute and booked it over the phone. I always like checking into these random places, seeing these generally friendly people at front counters that turn into new faces in the morning when you leave. After I checked in I walked to my car to get my luggage and “high ticket items” to be brought into the room as well as a hot cup of coffee I grabbed at a gas station. The rain started coming down so hard I was immediately soaked before I got to the car. I decided to get in the car and drive to find dinner which lasted all of about four minutes before I realized I could barely see out of the windows so I retreated back to the room, falling asleep to hammering rain on the window. 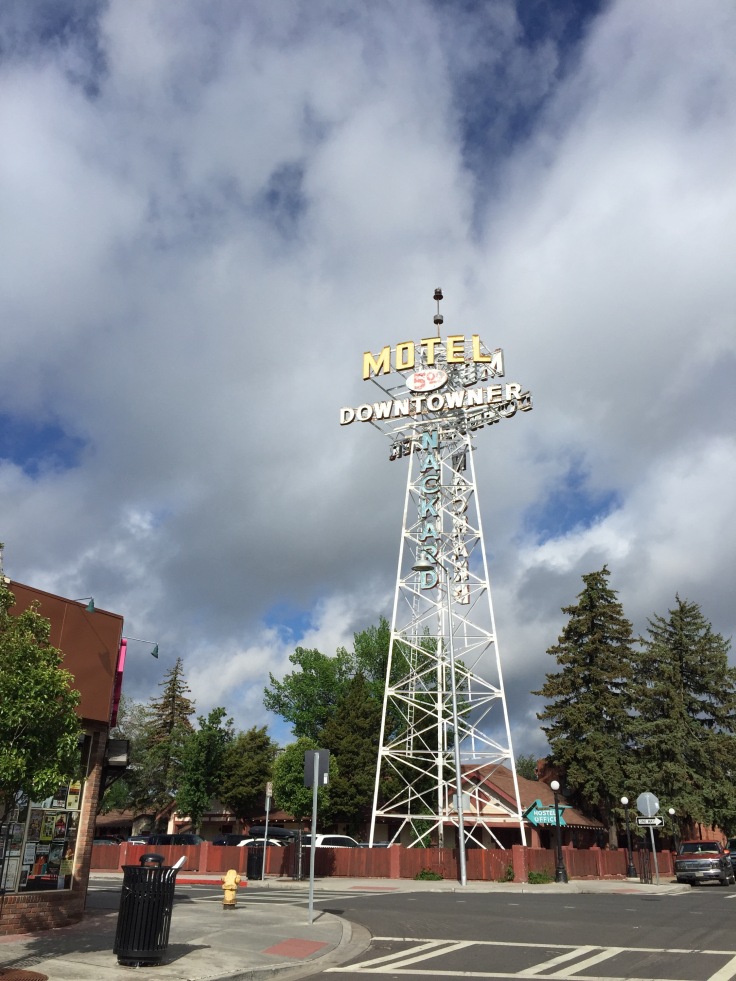 I feel like any time you wake up in one of these places surrounded my mountains is an amazing experience, especially if you arrived post-sunset the night before. Flagstaff early in the morning is a glorious place. Bright, blue and green everywhere, mountains that are usually capped with snow but not in June. Today it was bustling. It was a Saturday morning so all of the breakfast places were leaking people into the sidewalks and streets waiting for a table. At this point in this trip I just want to get there. I don’t care about stopping and seeing things, or eating at better places than Denny’s or random fast food. This morning though, I decided to eat a better meal than Denny’s or a random sandwich from a gas station mart. I found a spot (I swear I would never say that out loud. It looks nice in writing, but if you ever talk to me in person and I recommend “a spot” you can punch me in the face or throw a drink in my face) on Yelp and headed there. There was a parking space right in front and because of me being alone there was a spot, err, seat at the counter. The counter is your friend in a diner. The waiters and waitresses are on top of your coffee at all times and you can make eye contact with the guy making your food. The food was great, it was still early and my next stop was Las Vegas. I was well full and ready for the long drive through the desert, long stretches with mountains on either side of you that go on for hours. Beautiful and endless views in every direction make for an intense drive until you start getting back inside your head. Miles away from where I just left with no actual plan. This is certainly no way for a grown man to be at this point. Las Vegas should be fun. It’s very hot out.