I Was a Bully, But I Also Got Bullied So It’s Okay

When I was 13 years old or however old you are when you get to seventh grade I started school in my new town of Swampscott, Massachusetts. I was fat, had gross long greasy hair, bad acne and wore concert t-shirts all the time. Ozzy, Led Zeppelin, Iron Maiden, etc. Concert shirts back then were often “baseball style” with those long sleeves. I was also painfully shy and as I am now, socially awkward. Granted if I know the people I am with I am whatever the polar opposite of socially awkward is.

There were a group of 8th graders I could tell were just troublemakers. I mean granted I would be hanging with troublemakers pretty much a week or so later…One particular guy, his name escapes me now…his face though, he looked like a rat. Tiny little eyes, this rat nose and just this demeanor that was sneaky and shifty. Him and his group of friends were like those kids on the Simpsons, when you saw them coming down the hall you knew they were going to do something to you. So one particular day I was walking down the hall in an area where nobody happened to be at the moment and there was the Rat boy and his crew. This particular day I was wearing one of those long sleeved concert shirts and him and his crew grabbed me and proceeded to tie my sleeves to the two doors to the theater, which swung out. I was stuck there for a few minutes until someone, probably a janitor, came to my rescue.

Fast forward to couple of years after high school and I was a much bigger person, was lifting weights quite a bit and was considered “mean looking”. I was working at this small supermarket in this disgusting city called Lynn, Massachusetts. This girl started working there, and while she was a nice enough person, she may have been one of the ugliest girls I’ve ever seen in my life. She literally had a dark mustache and really hairy arms which led me to believe that whatever was happening “in other areas” was probably just as horrible of a situation. At one point she mentioned her husband would be coming in to meet her for lunch. So lunch rolls around and I am in the little lunch area and she comes in to introduce me to her husband and low and behold it is Rat boy!

So now I am much bigger and scarier than him, and he is married to the ugliest woman I have ever seen in my life. He shook my hand and we both kind of did that whole “oh hey yeah we went to school together” thing and subsequent visits to work he was always extra friendly to me.

Nowadays, this thing in the news has been “bullying” like it’s some new thing sweeping the nation. I guess with the onset of social networking bullying is worse than it already was. I don’t think it is, I think it’s less than it was. Aside from that incident tying me to the doors, when I was much younger kids were even meaner and nastier. You’d get pushed over, hit, shit thrown at you, etc. Nowadays kids get called fat on the Internet and they are killing themselves. I think the bigger problem is, parents are raising their kids to be pussies. In the summer parents are shaving the heads of their young men and sending these little shaved pussies out into the world to get taunted and made fun of. Wait, what about shaved pussy?

As a kid I bullied and got bullied quite a bit if I remember. One time, I had a paperback book with me in the bathroom and dipped it in a toilet and wiped shit on this kid Eric who later became a good friend, or maybe we were good friends already and this was some way of me showing my adoration to my friend.

In gym class in eighth grade I was playing basketball and my ball went into the area where another group of kids were playing. A tall fellow named Tom threw it back to me harder than he needed to. We got into a sort of tossing match with the ball, I’m assuming someone called someone a faggot and we agreed to “meet at 2:15” Which basically meant you would meet your new enemy and fight them surrounded by a small or large group of students cheering on whoever they were friends with. I wasn’t really a popular kid nor was Tom so our 2:15 meeting was a small affair with maybe a dozen kids watching.  It was definitely not like the Keith Roberts vs Dave Simpson fight that was such a big deal that it took place on a Saturday. I don’t remember what initially sparked the fight but I remember Dave (a good friend of mine at the time) “training” for it. Dave was a skinny pothead like me. Keith was a football player who pretty much knocked out Dave in less than a minute. My fight was similar. I pretty much won within a couple of minutes and then went on my way to smoke weed and listen to my friend’s dad’s Frank Zappa albums, smoke weed and nurse my light bruises from my fight. Quite the suburban denim clad victory parade I’m sure.

That was the last time I got in a fight. 1983. Years later I would see Tom around, and even as recent as a few weeks ago I saw him. We never acknowledge each other, he has about five or six inches on me now and is in much better shape than I am. I always imagine going up to him and asking him if he wants a rematch. 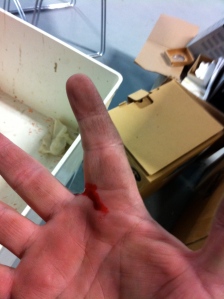