Las Vegas: The Last Day of the Rest of Your Life

Las Vegas is easily the most disgusting place in the world I’ve ever been to. I’ve been three times now and absolutely love it.

I left Flagstaff filled with breakfast and a couple of grand ideas. I found that Public Enemy and The Cult were both playing in Vegas this night. On the same bill. Tickets were around fifty dollars, which seemed reasonable considering I would at least gamble fifty dollars away and not get it back. I love both of these bands. Public Enemy were one of my favorite hip-hop groups as early as their first album when I fell in love with the beat in “My Uzi Weighs a Ton” The Cult were also a favorite, so much that I actually have two Cult themed tattoos on my body but that’s a whole thing for another day. And no it’s not a “Fire Woman”

The drive there was unremarkable for the most part, mainly because my patience for driving was getting low. As a result of my detour to Austin I was well over three thousand miles at this point. I do love this little stretch from Flagstaff to Las Vegas. There are a lot of those moments where mountains in the distance take so long to reach you a sigh of frustration easily falls out of your head every time you see a new mountain range in the distance you know you have to reach. It’s the ultimate test of patience, this stretch. It’s pretty much your last day of long driving, and going to Las Vegas is literally a gamble. Every time I’ve been I’ve enjoyed myself until I got back to my room and contemplated what it was like. Imagine the entire customer base of Wal-Mart mixed with the cast of the Jersey Shore.

It was Saturday night and I was getting nervous, as hotels in Vegas are extremely cheap. NOT ON FRIDAY AND SATURDAY THOUGH. I finally found a relatively cheap hotel off the strip (The Palms) I had a nice view of the fun part of Las Vegas from my twelfth floor corner room that was much nicer than the price seemed. I almost didn’t want to leave the room, but that was mainly because it felt like it was about two hundred and five degrees outside. I think it was two hundred and two. The woman checking me in half apologized to me that there was some sort of “pool party weekend” thing happening. Just then I noticed women walking around in bathing suits everywhere. I didn’t want to sound creepy and say, “That won’t be a problem” but I said, “That won’t be a problem” I mean really, I was on the twelfth floor and wouldn’t be going to the pool hoping for some sort of solitude.

So the pool was pretty much right outside my window and the fucking bass from the DJ playing dance music was loud and impossible to avoid. My room was filled with all sorts of bonuses, snacks, drinks and an “Intimacy Kit” which was basically condoms, KY Jelly and I don’t know, a flash drive with a bunch of Marvin Gaye on it maybe? Who knows? The bathtub in my fancy Las Vegas hotel room had jets so of course I immediately go in, but not before I took out the marijuana grain alcohol thing and took more than I had taken the day before in Roswell. I had visions of walking into a casino like Johnny Depp playing Hunter S Thompson, crooked and wobbly, lights everywhere. I had already stopped my brief couple of days with the disposable vape-cigarette thing so I was allowed this (I think?) I would not be taking advantage of the free drinks waitresses bring you when you gamble aside from some coffee and soda. I almost fell asleep in the mini hot tub in the bathroom. I put on Steely Dan as loud as I could to drown out the pool party folks below. Not the ideal band to block out sound but you know, it was a long day and Motorhead as much as it would have been the most appropriate band wasn’t an option for what my brain needed. Certain music helps me unwind at certain times. A lot of times it is loud metal and that kind of thing just not this time. Okay. 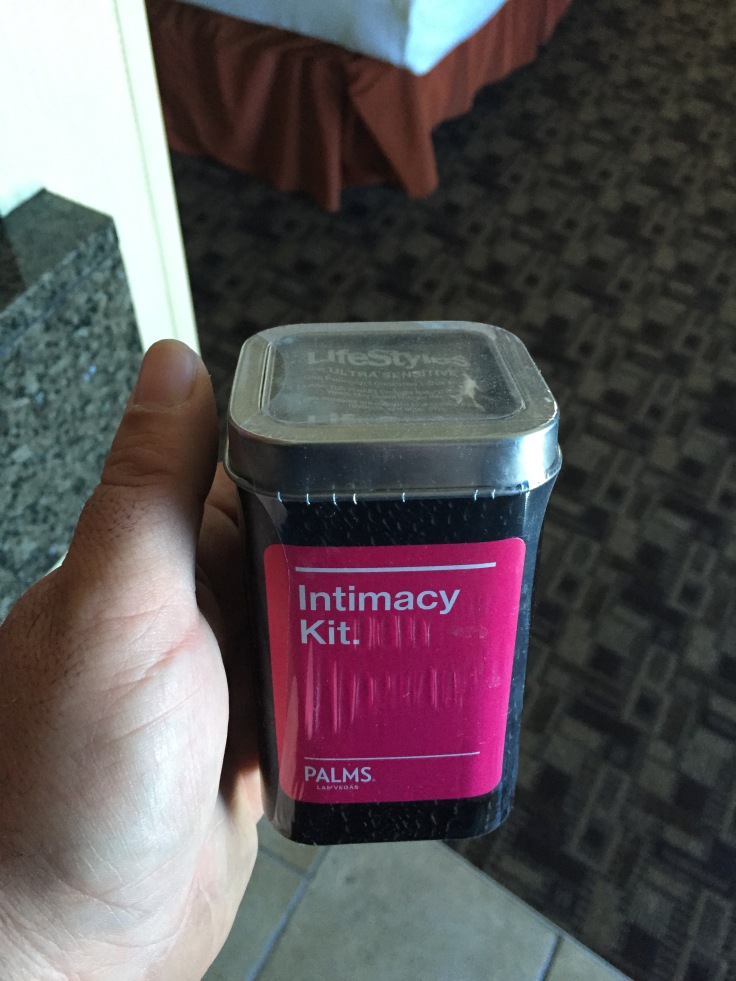 I took a little more of the weed cocktail thing and decided I would head down to the strip. I texted my friend who gave me the concoction in Texas and wrote

“As your spirit guide I back this idea” he replied

I discovered there was a shuttle bus to take you to the strip from this hotel. I got on the bus with a half dozen or so guys drenched in cologne. It was early still, probably about five or six more hours of sunlight. Bright Nevada sunlight. I can’t remember the last time I saw a tree. In this tinted windowed/air-conditioned caravan of douche I wondered how going to Vegas with a group of dudes works. I’ve always come here alone and it works for me. I gamble a little, eat a little and go back to my room. No alcohol or hooking up with women and that kind of thing. You know, stuff that’s just bad for you in general. When these guys meet women that are also traveling in a group how does that work out logistically? Sounds like a nightmare and a half. Speaking of nightmares, while daydreaming about the bros in the shuttle bus I start to feel the marijuana juice hit me. Thankfully it’s air-conditioned and a brief drive over a bridge and down a couple of blocks. It’s then I realize I have left my sunglasses in the hotel room. It’s so bright outside it looks like the sun, and although I don’t plan on walking around outside much, I need them to avoid eye contact. Just as it is on Hollywood Boulevard near all the bullshit, people are constantly trying to sell you something whether it’s a photo op with some unrecognizable cartoon character, or strange pussy for sixty dollars. I always make it a point to have sunglasses on the rare occasion I am down there. In Las Vegas you can at least slip from casino to casino without much contact with the sun. I just wanted my fucking sunglasses, is that okay? Especially as I started to feel like I was a little too high to be doing this. As we all exited the shuttle bus underneath Caesar’s Palace we were told there is a bus every hour on the hour and they end at 1:00 AM. I got out and immediately walked into the crowd of a casino in the afternoon. That familiar hum of slot machines, a light cigarette smoke odor and horrible people everywhere I looked. I lasted all of about thirty minutes before turning around and leaving and waiting outside for the next shuttle. Defeated by Las Vegas in less than an hour! It must be a record.

The bus came rolling in a few minutes after the hour. For the journey back I was joined by a couple in their 60’s presumably heading back to their room to have sex; just kidding, presumably going back to their room to take a nap before going to the buffet later. I made my way back up to my room like a paranoid freak in a Black Sabbath shirt should be. I immediately took another bath in the tub with the jets in it. I waited until the sun went down. The two views in my room were west and north, the west view was blocked by a building so I did not get to watch the sunset over the mountains or anything spectacular like that. Once the sky was black and half lit up with Las Vegas I would go back out. My plans were to eat something horrible and disgusting for me, and then sit in a Keno parlor and drink coffee and maybe win a few hundred bucks. I did two of these things anyway.

I discovered that just across the street at the Gold Coast casino, which is kind of old and shitty looking, there is a keno area. I won’t have to get back on that shuttle bus and deal with remembering what time it is and that kind of thing. How convenient! I’m still pretty high as I leave the hotel after taking a bath and talking to a friend on the phone for a little while. I somehow forget that I was just going to walk across the street to the casino with the keno and then walk home and get back on the shuttle bus. The evening customers are a little more hardcore. About seven of us total on this bus. All men and one woman. All dressed like you assume people in Las Vegas dress. I’ve also remembered my sunglasses this time. Unfortunately it’s the evening and I now have to carry these stupid things around all night. I find an area where there is a bunch of different food and of course find the Chinese restaurant and order some rice. That’s it, vegetable fried rice and a cup of water. Not a glass, a cup of water. I take a few hundred dollars out of the ATM and make my way to the casino and immediately lose a third of that money. Bummed, I hit up the frozen yogurt place and get something that I immediately cover with shit like cereal and whatever else. I decide to leave the area and head back to my hotel again so I can walk over to the Gold Coast and play keno. It’s easy, uncool and more my speed as a seven hundred year old man.

The Gold Coast is great, off the strip. Not too crowded, and the crowd that is there are mostly people with a good amount of grey hair on their head. I find the Keno area and pretty much stop here for the rest of my night. The waitress is quick with the soda and coffee refills and I’m fine giving her a buck each time, especially since I’m pretty much losing money by the minute just being in this casino. The folks in the Keno area are a rugged bunch. There’s me and my whole situation. A couple of women in their fifties whose husbands show up every half hour or so and hand them money, a couple of mysterious Asian men, and a handful of elderly men and women. Nobody in the keno parlor is getting laid tonight and that’s fine. I have a big day tomorrow; I’m on my last day of this long road trip where I am going to settle in California for the rest of my life. It’s going to be great.

I walk back to the room, broke and feeling a little pathetic as I have every time I’ve come here. Thankfully I fall right asleep under the far away glare of the strip. I have a dream of the glare of light at the end of this trip; the final resting place, just out of reach. I’ll never take one of these long road trips again once I stop. I’m tired, torn and frayed, but yeah California will be waiting for me tomorrow when I get there. Life is just getting started.