The Longest Verse in the Bible Is…(Rolla, MO to Claremore, OK)

Today was one of those days where my head was elsewhere. Not sure where. Well, I know where it was, I don’t know why. I had plans to drive a lot further than I did to make tomorrow an easier drive but ended up stopping and getting a room to get my head in order and it just got worse as the day and evening wore on. Feeling lonely and empty and unsure of the future just a few short hours after writing about how exciting it was to not have a plan. Once I start getting inside my head it’s impossible to get out and I act out with either humor or passive aggression that I generally keep to myself or use briefly and then immediately regret it. I have to keep reminding myself that even though I am out here with nobody, seeing friends here and there for brief periods of time the loneliness I feel was exactly the same in New England. They say certain smells will remain in your memory forever. The last couple of days my sense of touch has been with me, particularly my pets I left behind. I can feel exactly what the dog felt like to touch; I can picture just how he felt from nose to the tip of his tail. Same with the cat. I have great memories with the pets from the day I met them until the impossible tasks of letting them go to new owners. Before this turns into too much of a bummer, let’s switch gears. 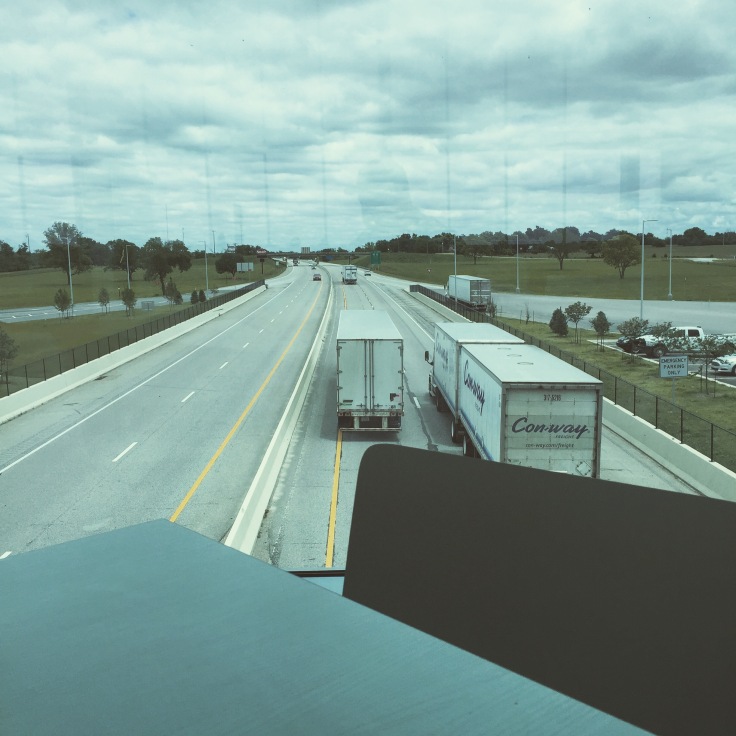 I am in Claremore, Oklahoma, which is near Tulsa. I could have driven a bit more but didn’t feel like tackling Texas today. I stayed here before, in 2009. There’s not much to do here aside from eat food that isn’t good for you, so that’s exactly what I did. It’s about three hundred degrees here today, everyone around here talks slower, everyone is friendly and says hello, or rather “howdy” I went looking for something to eat and for whatever reason thought it would be a good idea to go to a Chinese food buffet. In Oklahoma. The food was surprisingly okay, I’m not really a food snob and I know when I get depressed I will just eat whatever horrible thing you put in front of me. I feel like I’ve been eating a steady diet of sandwiches and French fries for this whole trip. My initial plan to “stop at cool small places” along the way was kind of thrown out the window to make room for a more relaxing trip. Just not putting too much thought into what I’m going to eat, and deal with finding places way off the route is not something I can get into. I am improvising this trip for the most part, but mostly to see stuff, photograph it/write about it, etc. Food is a secondary thing to me at this point. So this Chinese buffet. Anytime I have eaten Chinese food in other parts of the country that aren’t Boston or San Francisco I feel like I have some sort of chip on my shoulder like “yeah, you cowboys don’t know real Chinese food. I had to walk three miles in snow up to my balls to get a crab Rangoon” or, “I once sucked a dick for some scallion pancakes”, etc. There was the usual stuff at the buffet which is always slightly different and more disgusting than “back home” And then these was the seafood area. I thought to myself where I was right now: Claremore, Oklahoma. How far is the ocean from Claremore, Oklahoma? Like eight thousand miles at least. Okay, I’ll just try three of the ten different seafood things here. Surprisingly, I didn’t get sick while sitting in the restaurant. 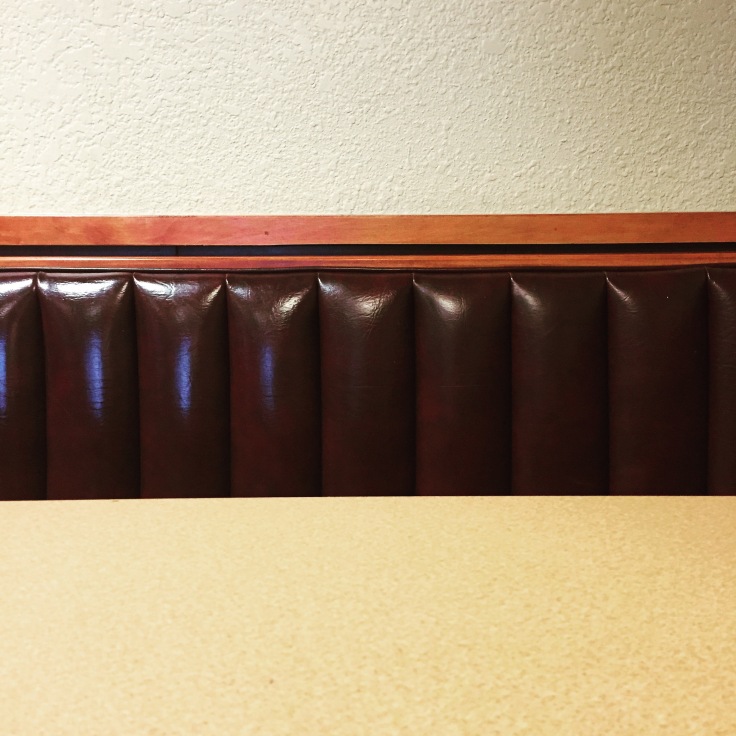 While in the restaurant, in between trips to the buffet I thought of an idea for one of the Facebook Reviews I was doing for a while on Facebook. Someone had mentioned me reviewing all of the rest areas along the way. Aside from when I first started doing them, I never actually went to any of the places I reviewed. I just randomly found them on Facebook. I thought of the absurdity of a rest area in this part of the country having bibles in the stalls and went from there. Eating seafood at this buffet and maybe getting sick so I’d be on the toilet for a long period of time. I don’t know a thing about the bible. Sorry, The Bible. So I looked up “longest verse in the bible” Picturing a guy on a toilet for so long he’d be able to read the longest verse in there. I found it, wrote the review surrounded by gigantic white people and Native Americans from Oklahoma. Made some folks back home laugh and left the buffet feeling much better than I did when I initially pulled off the highway. 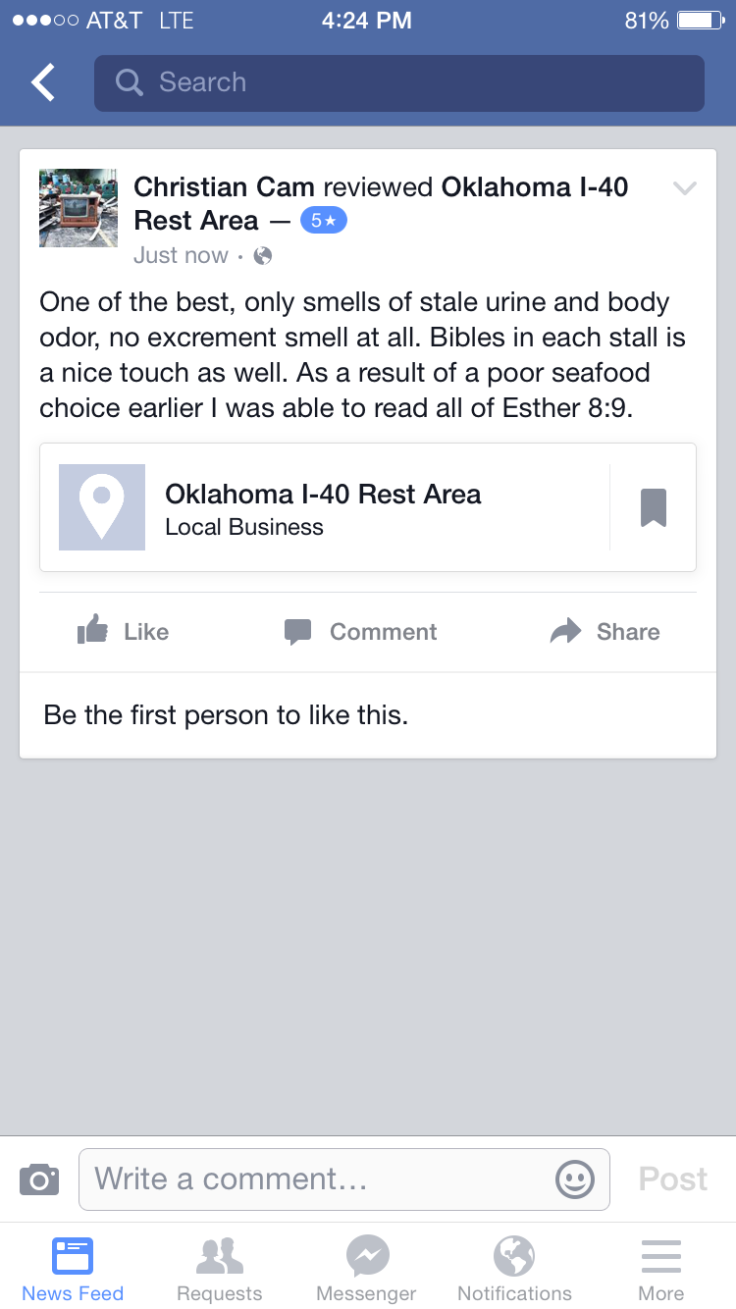 Trying to find coffee on ice or a coffee themed drink on ice in Claremore, Oklahoma proved to be a task. I found a cool little downtown area, saw a little coffee shop, pulled into a space right in front of the shop and saw the hours on the sign “Closed at 5:00 PM” Clock on my phone literally said “5:01” FUCK FUCK FUCK. If I hadn’t have searched that “longest bible verse” I may have made it. In the name of detail in my comedy I missed out on a potential cup of coffee. I got out and walked around anyway, dressed as usual in pants, a baseball hat and THREE SHIRTS like always regardless of weather. It was disgusting out, I got a few good pictures and then drove up and down the stretch of Route 66 looking for a place to get coffee, heading back to my hotel defeated and thinking I would just hit the gas station across the street for a nice hot cup of coffee. As I was pulling up there was literally a coffee shop RIGHT NEXT TO MY HOTEL. Nice small place run by a bunch of women with Oklahoma accents, regulars streaming in and out as I sat there for an hour or so reading the paper. This is the stuff. I often make jokes or comments about people and I think people get the wrong idea. I made some jokes about people in certain areas of the country and my friends would jump all over it. The reality of it is, at least with me. I don’t judge people, ever. I joke about them, but I don’t know, these people out here, living their lives and doing their thing while I pass through and have a brief friendly interaction, there’s nothing better than seeing that. I could sit on the internet all day and make fun of people from Texas or Dave Grohl, or I could just go out and live my life and ignore people that are a detriment to my life, and embrace the different people everywhere. I don’t have to agree with their opinions on religion or politics but I find nothing wrong with experiencing people from all walks of life. If you can’t appreciate that or don’t understand that I don’t think I’d actually get along with you in real life. Anyway, Oklahoma.

I went back to the room and wrote some of that stuff there, read a little and then went back out when the sun went down. I wanted something “light” so I found some fast food taco place called Taco Bueno and got some tacos which I barely finished while what I learned was the pilot episode of “Friends” played on my muted TV. Tomorrow I will go to Texas, meet some friends in Austin and stay there for a couple days. I’ve never been and am excited to see familiar people and see the city itself. So far, splitting up the trip like this. Spend a couple days by myself, see people, drive by myself is working. I am fine by myself, and always have been. There’s really nobody I would ever take on one of these trips in the car for multiple days. I need the headspace, and after this Austin stop the rest of the trip is my favorite part of the country, the desert: New Mexico, Arizona and Nevada. I’ll be alone for that and it gets desolate. I love it and I can’t wait to experience it, take pictures and talk about it. Unless I die or am kidnapped. If that’s the case this will be the final installment of this series. I should be okay though, I’m scary looking. 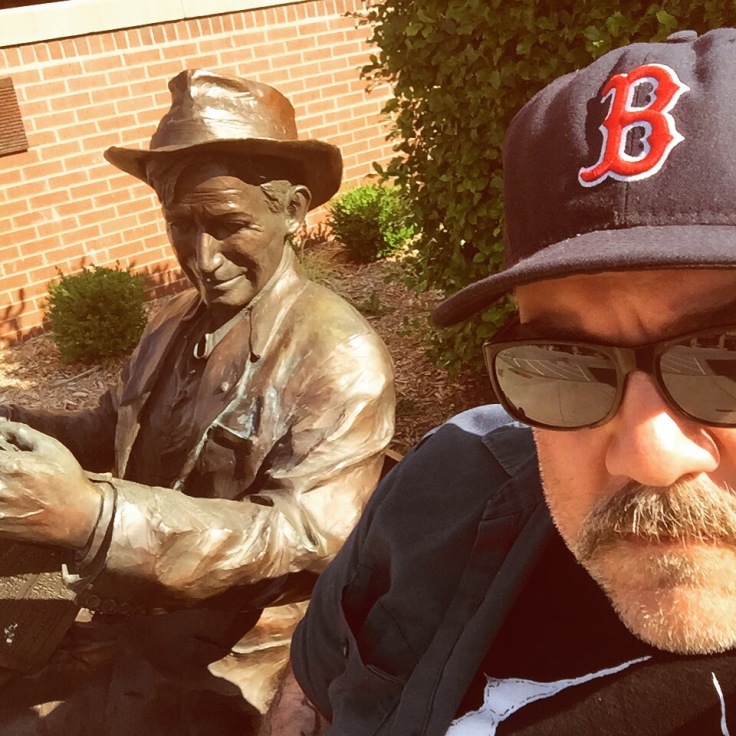