When I think of where I started in hardcore I think back to junior high school in Swampscott. Two different events, one of them has to do with me buying weed off of one of the three known punk rockers in the town at that time (1982). The other time would be in my class when we had a substitute teacher named Mrs Quint. I had heard about her. She was supposedly this really nice woman, and she was. On the desk when we arrived for class she had a couple of stapled together booklets that said “Suburban Punk” on them. I picked one up and leafed through it. She told me it was her son’s “fanzine” I was curious enough to read some of it and then kind of forget about it. Around the same time my great aunt told me of her nephew Al who was in a band called SS Decontrol. She had a copy of the first record. It looked poorly put together and silly to me. I was used to Iron Maiden album covers. Fast forward to the following spring when I needed to buy weed. One of my burnout friends directed me to this kid Peter who was “kind of weird, a punk rocker” Peter and I became good friends, he played me a number of hardcore records, namely the compilations “Not So Quiet On the Western Front” put out by Maximum Rock and Roll and the Flex Your Head compilation put out by Dischord. We would spend days in Peter’s basement bedroom in Swampscott listening to Minor Threat, MDC, Misfits, SSD, Crass, Rudimentary Peni and just about anything else that fell under the hardcore or punk rock umbrella. Peter told me there was a show coming up at a club called the Channel. The bands were Channel 3 and Kraut, and his friend Al Quint would drive us in along with Al’s friend and Suburban Punk photographer Paul. Al was friendly and had an encyclopedic knowledge of punk rock music. He had his nose broken that day in the pit. This was the beginning of a friendship that is still here thirty-two years later.

Although Al and I aren’t as close as we were, we spent a good amount of time in the late 80’s in our band Shattered Silence. The first lineup I played bass and he sang, I eventually traded places with Al and took over the microphone, mostly during my time as a (non-racist, duh!) skinhead. We even did a brief set at Al’s wedding to his long time amazing wife Ellen. Al and I also worked together at a used record shop called Rockit Records, often commuting in together. At a certain point in the early 90’s I stopped going to hardcore shows; I missed the whole “early 90’s” thing that is apparently “a thing” Although I continued listening to hardcore music I didn’t really think of myself as part of that scene anymore. I certainly wasn’t one of those folks we heard about in all of those songs who “turned their back on the scene” but I just lost interest.

In the last few years as social media has taken over everything I met a group of people on a private message board from different eras of the hardcore scene. Most of the discussion generally has nothing to do with the hardcore scene, hardcore music and more with making fun of people once they leave the private group. Some of the folks on here I knew in real life, and some I had never met. We had a couple of meet ups in person and then one particularly great one at a Seven Seconds show last August that I wrote about here. That night was great, great new friends with a common background against the back drop of one of the best hardcore bands from back in the day (at least for us). I felt like I did when I went to shows as a teenager, hanging out with similar people and seeing our favorite bands that you could easily approach and talk to. “Hey that’s Kevin Seconds just leaning on the van talking to Hank from Slapshot’s ‘wake up Hank we’re off the line!’ no big deal” It is kind of a big deal for people like me. I guess it would be the same as if your parents saw Paul Simon leaning against his Prius talking to Phil Donahue. The only difference is these popular faces in the hardcore scene aren’t on some pedestal or hidden back stage. Often you could call or write these people (Tony Erba from Fuck You Pay Me hilariously recalled on stage calling Al Quint whose phone number was in the credits of his zine) When I realized who my cousin was (Al from SSD) I got his number from my great aunt and would often call him to talk about “the scene”. This was after “Get it Away“ came out so the last thing he wanted to talk about was hardcore. He did give me a list of albums I should buy. In retrospect I realized he just told me to go buy all of the records on X-Claim! I’m pretty sure he talked about AC/DC and the band’s “new direction” And hey I do like some of “How We Rock” Al Quint sort of became one of these “legends” in the hardcore scene, not just in Boston. I mean there is literally a picture that exists of him singing with his arm around Ian MacKaye from a Minor Threat show. The closest I have to this is a picture of me in the crowd at a U2 era Seven Seconds show with an ill advised mustache…that and half of my face is on the original pressing of “Break Down the Walls” 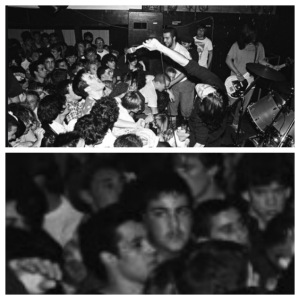 Al had been contacting me off and on through the years to do a Shattered Silence reunion something I imagined nobody would ever care about. We never released anything official and I really just didn’t feel like playing hardcore music in my 30’s or 40’s. When he contacted me for this recent gig, for his 55th Birthday at first I was apprehensive and after some thought I decided why not? After a somewhat depressing few months in my personal life this could be a great outlet for me to get my head somewhere else. We recruited long time friend Ian to play guitar, I would play bass, Al would sing. Our original drummer could not do it for personal obligations so we recruited another friend of Ian’s, Jimmy to play drums. I couldn’t be happier than with this line up.

A number of messages between the four of us started happening, Al picked out some songs we would do (I immediately shot down my song “Aqua Net Crew” which was embarrassing to do when I was 17, at 45 I don’t know if I could sing the lines “I wish I looked like Robert Smith but I need something to color my hair with” with a straight face) Instead we went with our song about Oliver North. We would do a handful of Shattered Silence songs, and some covers (Might Makes Right by Negative FX/Slapshot, Always Restrictions by Discharge, Can’t Tell No One by Negative Approach)

Our first practice went great. I learned right off the bat Jimmy was an encyclopedia of old hardcore songs and could jump in to any of the brief jams on cover songs we fooled around with (Black Flag, SSD, Slapshot, etc.) Our second attempt at a practice only kind of happened because of a communication issue and it was just Al, Ian and myself. Playing hardcore without drums is kind of a useless exercise really. No worries, we’d pick it up a few days later with the whole band. A couple of snow day cancellations later and we were ready to meet up again. We all got to the practice spot in South Boston at the same time only to discover we didn’t have keys to get in. A week before the show. On the drive back we noticed the spot where the famous Channel club was, we decided to get out and take some photos and a hilarious video of Al and Ian “stage diving” into a snow bank. I passed on the snow bank stage dive because the camera adds about 40 pounds to me. We got two more practices in the week of the show and nailed everything. Everyone left the last night happy and confident.

The night of the show was great. I met up with friends for dinner beforehand, got to the hall and was not the least bit nervous. Outside of hardcore I had been playing guitar in bands and played many shows, this show would be different though. I felt like I wasn’t a boring 45-year old guy reliving his youth, it felt like an actual thing. Playing music in front of people, some originals nobody has ever heard for the most part and a few covers. People danced, sang along, celebrated Al and hardcore music, it was great. The three other bands were all amazing, Stranger, Fuck You Pay Me and Dropdead. The intensity with which all of the other bands played was amazing and if you didn’t feel it while watching you were probably wasted or dead.

I can’t really get into writing about my experience on stage playing aside from saying it was cathartic and perfect and look forward to doing it a couple of more times. I drove home by myself slow and carefully on the snowy highway listening to John Coltrane to bring my head back down to earth with a different type of cacophony but still coming from the same place.

2 thoughts on “A Youthful Spark”