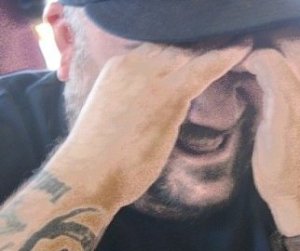 When the phone at my desk rang I immediately knew what was about to happen. I had just arrived at work via taxi after dropping my car off at a garage for a number of repairs that cost just under $1000. In the dead of winter, smack in the middle of January, there was still filthy grey snow and ice everywhere. I walked from the garage to a Dunkin Donuts, and then a convenience store. I found a card on a bulletin board for a taxi service, which ended up just being some local guy in his 60’s with a Lincoln Town Car. I told him I would call him back later in the day for a ride to the garage when my car was ready if I couldn’t get a ride over from someone at work.

I was working at Square Records for a little under eleven years. Unfortunately they had been laying people off for a few months. I felt pretty safe. There were two other “equals” in my office. One had been there much longer than I, the other a little shorter than I had been. A few weeks before someone “from upstairs” accidentally printed a document in the printer room listing the salaries of everyone in the company, (even the owners, president, etc). A co-worker and I both discovered it. We of course immediately decided we needed to look it over. The best way to go about this was to make our own copy. The person who printed it could be showing up in the printer room at any moment. One of us acted as a “lookout” while the other quickly made a copy of it and put it inside of a manila folder. I still have this document at home in a folder along with other stuff from there. If you ever want to feel like shit at your job, find out what all those people you don’t like above you make on their paychecks.

I walked into the HR woman’s office and she had a bunch of paperwork ready for me and told me they were letting go go of my job. I could tell she must have hated doing this job. I think that particular day five of us got laid off. I signed all the papers including ones that basically said I wouldn’t talk shit about the company. I think this was just during the period where they were paying out my severance. Now it’s probably okay to talk shit about that sweatshop of a warehouse that released albums by some pretty amazing artists but also some really bad music as well. that’s for another time though.

I don’t really remember the reasons why I was laid off, all I can say as boy was I excited. I had hated the job for quite some time and I had just been told to go home, forever. They would still continue to pay me for four months and keep me on the 100 % full health and dental plan. Since my car was still in the shop and I had only been at work for a few minutes I had nowhere to go aside from back to the garage. My car wouldn’t be ready until way later though. The company offered me $25 to catch a cab back to the garage and then one of my co-workers offered me a ride. The ride was a bittersweet drive. I had seen this woman every weekday for years and now would probably not see her for some time. She was one of my favorite co-workers.

I got back to the garage and told the guy fixing my car I just lost my job but to “keep working on it” I then called my family, and texted a few friends and my girlfriend. Not knowing some of the turns my life would take over the next few years I was filled with excitement. Also, I was scared. Arriving home I hugged both cats and sat on the couch wondering what to do. I think I made a bunch of chicken cutlets. Or got high. Probably both.

That night I went to sleep and for the first time in who knows how long, and didn’t turn my alarm on. There was something liberating about that. I of course woke up early the next morning anyway. My first though? “Fuck, I have about twenty-five minutes left to make McDonalds breakfast!”  This was a mantra I would become very familiar with for a long time. The Mc Donalds breakfast had become a ritual for a while until one day walking in I saw a rather large man in his 50‘s walking out. I went in and bought a newspaper and waited in a brief line. When I got my food a few minutes later I went and sat at the window. Outside was an ambulance and a small group of about four or five people gathered around. Seems like my buddy from the way in dropped on the ground. I quickly ate my two egg and meat sandwiches, hash browns and coffee and left. I made it to my car without having a heart attack. It was a good day indeed.

When you get laid off it’s almost like having someone break up with you. They’re not really pissed at you, they just don’t think you should see each other anymore. I guess this would make a severance package a period of make up sex that abruptly ends a few months later.  I spent a few months confused not knowing what to do at first. Knowing I could collect unemployment at some point, knowing I had a place to live and a patient girlfriend that was working a good job was comforting. I decided looking for a new job would be maybe the fifteenth priority. My top priorities would be buying things from the internet to a point where a package was arriving everyday. I memorized the sound of that mailman’s truck pulling up in front of our house. Peeking out the window until he drove away and making my way outside to grab my presents. It was like Christmas every single day, just without the having to spend your money on other people.

I was making relatively good money so once I started collecting I would be getting a good amount of money every week as long as I checked in every Sunday. I supplemented my income with the sale of various collectable items I had acquired through the years working around music. Music collectors have deep pockets, and it’s always been a way for me to make extra money for as long as I can remember. The first week I started selling on eBay I put a Slayer 12” single I bought in 1987 for probably $4.00. A guy in Canada bought it for $450.00 FOUR-HUNDRED AND FIFTY DOLLARS. Yeah, I know right?

Music would end up helping pay a lot of bills. Not music I was playing, music I was selling. Whether it was promotional items I held onto for years or expensive Misfits albums (I had doubles of some so it was okay), I was always able to make some sort of money. At the same time I was burnt out from that business. Selling things I wasn’t supposed to and that kind of thing seemed ridiculous to me, and still does. It’s not my fault some asshole thinks buying a rare CD by the Cult for $60.00 is a good idea. Of course I eventually ran out of stuff to sell and grew tired of hunting down cheap stuff to turn over for more money so I slowed down. Thankfully, the government was in a generous mood as I was somehow able to collect for well over two years.

For the longest time, well for one-thousand and thirty-five days, I had no idea what going back to work would be like, What being responsible was like anymore. Without really knowing it I was entering a mid-life crisis. It was kind of fun though.