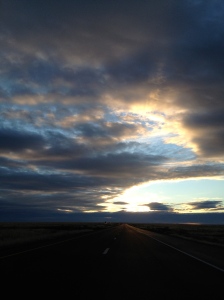 I was thinking about it once I got into Texas today and maybe because I made the joke before. I always imagine when you get to Texas some guy just comes up and says “Welcome to Texas, faggot” and then punches you in the face. I was totally ready to throw Texas under the bus. When you think of Texas you think of George Bush and steak and the Dallas Cowboys and tumbleweeds and white people and long stretches of highway and giving retarded people the death penalty. Well, I’ve only been to this area of Texas (Amarillo) about four times now and granted it’s just that little piece up top I like it here. I forgot that people don’t actually come up to you and say “Welcome to Texas, faggot” and then punch you in the face.

I held the elevator door at the hotel for an older gentleman and he obliged by engaging me in a little small talk in the elevator that didn’t feel forced, like he was just naturally a nice guy. I went to a restaurant to grab some takeout and a guy in the bar started talking to me about football, which was on the television, and then about my drive across country, and our jobs. He even offered me a beer. There was nothing creepy or weird about the whole thing, just a guy sitting there shooting the shit with me. We both checked out the natural redhead that walked in, but didn’t make any kind of eye contact like “aww yeah” or anything. But I saw him checking her out. Not sure what she was doing with a guy that looked like Barney Rubble in a salmon Izod shirt with a goatee, but hey I’m just passing through town anyway.  So far my experience in Texas has been great.

I’ve obviously spent a long day driving today if I’m talking about different small talk conversations I had. That leaving early plan this morning worked out great. I was on the highway by 7:15 AM. The highway was amazing at this hour, the sun wasn’t fully up and there was a picturesque cloud pattern all over the sky. I made it to a small place called Santa Rosa in New Mexico. It is one of these towns that Rt 66 slices in half. There is very little going on, but a good amount of motels and shitty fast food and old diners to keep boring people like me interested. Well, I stopped and took a number of pictures of old signs and that kind of thing. I had been driving for over seven hours. I decided to cancel my hotel reservation in Santa Rosa and drive through another two plus hours to Amarillo. I’m glad I did all of that driving, even if it was on about two hours of sleep. I did drink three Starbucks drinks throughout the day each with four shots of espresso in them and I’m still awake here.

The drive through New Mexico is long. It’s obviously one of the more beautiful states you can see in this area. I went through a number of Indian reservations, stopping at a gas station at one and buying a couple of bottles of soda in glass. I went outside and realized I had no opener. The woman behind the counter went and opened a new one for me and I sat there fumbling with it, two other women came and watched me. I was briefly paralyzed with fear that maybe I was using the bottle opener wrong. I mean really, there is only one way to use one. For whatever reason though, this one didn’t work. It was evident when you inspected it closely that the gap between the okay why am I explaining this. We went and got another one and I opened my bottle and was on my way. Holy shit Mexican orange soda (made with cane sugar) is fucking intense.

At one point today I realized I could probably make it to the Cadillac Ranch, which is here in Amarillo, before the sun went down. I was racing the light as I watched it in my rear-view mirror disappear into the ground hundreds of miles behind me. I made it to the place just as it was dusk though. A van full of young guys that looked like a hardcore band was emptying out. I noticed one of the guys had a Red Sox hat and the license plate was Massachusetts. I walked with one of them chatting about music and mutual people we knew; they were from Worcester and blah blah blah. I have to say it was pretty surreal. The dude I met took some pictures of me with my phone but I must have forgotten to tell him “don’t make me look fat(ter)” so I deleted them. The ground around the cars is littered with spray paint cans. I wonder how many layers of paint there truly are. At first you notice the litter when walking up to it. If it were anywhere else it might bother you, but this place is literally right off of the interstate (I-40 which I’ll spend a total of 1500 miles on) and it’s just dirt, it’s not a field, it’s just acres of dirt. 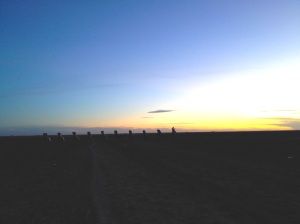 Driving through some desolate area I came upon a roadside monument and I thought of how awful and lonely it would be to die on one of these highways. Nobody drives by for hours you could just be dying for hours and not getting to say goodbye to anyone. At least you’d get to see the amazing sky before you went. Maybe you had a nice Mexican dinner earlier. They have pretty good Mexican food out here (obviously). 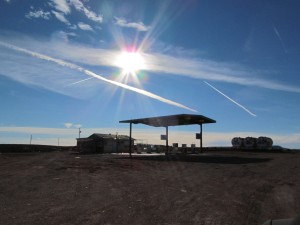